The straight leg deadlift is a very popular and often improperly executed exercise.  You will see a majority of males completing these exercise with a need to load so much weight on the bar that form goes out the window.

If you are not familiar with the straight leg deadlift, it is a hamstring, gluteus maximus, and spinal extensor strengthening exercise that is also referred to as the hip hinge.  I love this exercise since I believe it works the gluts and hamstrings the way they are supposed to function as opposed to the popular selectorized prone or seated hamstring curl machines.  In the past I always trained hamstring strengthening through knee flexion exercises, but after further research and reading it now seems more beneficial to train them through hip extension movements like deadlifts, hip bridge variations, etc.

During the exercise it is important to make sure you maintain a neutral spine position and keep the shoulder blades pulled back.

To properly execute the straight leg deadlift, allow a slight bend in the knees (only about 15 degrees) and push the hips back slightly while hinging forward.  It is essential to keep the spine straight and shoulder blades pulled back throughout the exercise.  Lower down the bar or kettlebell close to the shins.  Allow the weight to drop to a position where you feel a slight stretch in the hamstrings.  Raise back up to the starting position by squeezing the gluts tight and pulling the hips forward.  Maintaining proper upper body posture does get difficult once we start adding more weight to this exercise, so make sure form is perfect before loading up.  Below you will find a video on proper execution of the straight leg deadlift.  This is a great beginner/intermediate exercise that helps pave the way towards the single leg version which challenges the same musculature with lower resistance but adds a balance component.

When I was first introduced to the cook hip lift I was immediately impressed by its effectiveness.  This exercise was invented by PT and Strength Coach Gray Cook, hence the name cook hip lift.

Although it is a more challenging exercise, I do believe it should be placed before any other bridging exercises, such as the double leg hip bridge, hip lift, single leg hip lift, etc.  When doing the cook hip lift, start with knees bent and feet on the floor. Next, pull one knee to chest.  If you have a tennis ball place it between the thigh and just under the rib cage so you can determine if you’re holding the hip into enough flexion.

Now, using the single leg that is in contact with the ground, complete the normal hip lift motion by squeezing the gluteus maximus (butt muscle) and lifting the hips off the ground. You will notice immediately that the amount of motion available is significantly less than other bridging exercises.  By pulling one knee to chest, we are placing the pelvis into a posterior tilt and therefore keeping the lumbar spine neutral.  This is a great benefit compared to the regular hip bridge (see picture below) where we easily lift the hips between the knees and shoulders, but don’t realize that a significant amount of motion is actually coming, not from hip extension, but from lumbar extension.

Try out this exercise by holding the highest position for 3 seconds and completing 1-3 sets of 8 reps.  Each week add 2 repetitions until you reach 12, and then start back at 8 repetitions using a 5 second hold.

If you are looking for improved hip extension and gluteal activation, the cook hip lift is where it’s at.  If you notice cramping in the hamstrings, it does not mean stop the exercise. But, it’s important to realize that your glutes aren’t firing correctly and you may need to add additional glute activation exercises to your program.  Not only do we improve hip extension with this exercise, but target the hip stabilizers (abductors, adductors) to keep the single leg hip supported during the hold.  Check out the video below to see exactly how the cook hip lift is done.

Garrett McLaughlin is an athletic trainer, personal trainer, and certified active release techniques provider. He is passionate about creating safe, and effective fitness and rehabilitation programs for the general population and athletes. ‘Like‘ Garrett’s Facebook page to stay up-to-date on related health, fitness, and nutrition information.

Posture is a huge problem today with the majority of people sitting incorrectly during tasks such as driving, sitting at a desk, and typing on the computer.  If you look back at one of my previous posts on posture, we have to make sure there is an even ratio of pushing to pulling exercises.  Without this proper ratio we continue to fuel the imbalance and strengthen the anterior musculature without a reciprocal pulling/lengthening motion.

The wall slide is a great warm-up exercise to help you lengthen the muscles at the anterior shoulder such as:  pectoralis major, anterior deltoid, and subscapularis.  Not only are we lengthening the tight muscles but working on strengthening the posterior muscles involved in keeping the shoulders back in proper posture such as:  posterior deltoid, rhomboids, trapezius, infraspinatus and teres minor.  To magnify the benefits, include this exercise after any soft tissue work to the pec major and anterior deltoid such as self-myofascial release with a foam roller or trigger point ball.

What drives me crazy on a daily basis is when people, including the general population and athletes, think of their abdominals as the only part of their core.  The core, which it is commonly called, is more accurately called the lumbo-pelvic-hip complex, is comprised of 29 muscles.  By calling it the lumbo-pelvic-hip complex it clearly demonstrates that the “core” is more than just abdominals, and ranges from all the muscles that attach to the hip, pelvis and lumbar spine.

Doctors often recommend core strengthening or core stability exercises to help combat acute and chronic injuries such as: disc pathology, sacroiliac dysfunction, chronic low back pain, and low back strains.  Yes, it is important to strengthen the core but we need to know the difference between strength and stability before choosing which type is best for each case.  Core stability is creating and maintaining a neutral spine position with or without the presence of movement in the extremities (see hip bridge).

In contrast, core strengthening is moving the core through it’s range of motion concentrically and eccentrically to improve strength in the surrounding musculature (see abdominal crunch). 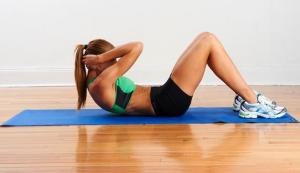 In most athletic clubs, where I work included, there are selectorized machines such as the resisted abdominal crunch, lower back extension, and torso twist, which fit into the core strengthening category.  Are these exercises beneficial?  Of course, but remember repeated flexion-extension movement of the lumbar spine has been proven to increase risk of injury, especially disc pathology according to Stuart McGill in his book Low Back Disorders.

I myself am a believer that before we focus strictly on improving strength of these global muscles such as the rectus abdominis (main ab muscle), obliques (rotational ab muscles), and quadratus lumborum (low back muscles), we must improve core stability while maintaining a neutral spine.

Some of my favorite core stability exercises include: dead bug, hip bridge, quadruped hip extension, and plank variations.  Below you will find videos to demonstrate each of these exercises.  Focus on using the core to keep the lumbar spine supported in a neutral alignment.

If you have been focusing strictly on a machine to work your core, then try to add these exercises into your program. To improve core stability, we address muscles such as the transversospinales group, erector spinae group, and transverse abdominis; which help maintain a neutral and stabilized spinal column.

I decided to start adding an exercise of the week to provide people with options when developing their own resistance training programs and to also highlight some of my favorite exercises and why I find them beneficial.  Many people know I’m a fan of Strength Coach Mike Boyle and believe highly in unilateral training.  That is why I chose the split squat to start with.

The split squat is the best exercise to bridge the gap between conventional double leg exercises and single leg exercises.  Obviously it isn’t a true single leg exercise but with the alternated stance it calls on a greater degree of core, hip, knee, and ankle stability as well as hip flexibility.  In terms of hip stability, this exercise targets the gluteus medius and minimis to a greater degree then regular squats as it is essential to prevent valgus collapse of the knee.  Balance is often a neglected area in many exercise programs as many people rotate from one piece of selectorized equipment to the next and aren’t even in a weight bearing position.  That is why we need to get up on our feet because that’s where life happens!!

To perform the split squat, start with the feet in an alternated lunge stance about hip width apart.  Instead of lunging forward, focus on bending the back knee under the body which will enable you to drop the hips straight down towards the ground.  It is important to watch how the front knee tracks.  We want the knee to stay in-line with the 2nd toe and don’t let it pass over the toes which will cause significant stress at the anterior aspect of the knee.  With all exercises we want to make sure the back is up straight and shoulder blades pulled back.  Lower down until the front thigh is parallel to the ground.  Below you will find a good demonstration of how the split squat is performed.  Add this exercise to your program to add variety and start on the path towards unilateral training.

As a whole, humans have very poor posture.  In addition to sitting at a desk, typing on the computer, driving, and many more tasks we complete on a daily basis, we continue to work-out our “mirror muscles” the most.  “Mirror muscles” are exactly as it sounds, the muscles you see in the mirror which lie on the front of our body.  But does this make much sense???  I guess if developing a good beach body is your only priority and you have no concern for overall neck, shoulder, and spine health, then go for it!  Just realize that what we do in the gym is not only to accomplish our goals but to correct and improve any postural deviations such as poor posture, muscular imbalances, etc.  Next time you are at the gym take a look around at the forward head posture and rounded shoulders of the person next to you.  Then look at the exercises they are doing…  Is there an even ratio of pushing to pulling exercises??  In most cases I would say most definitely not.  For every chest or shoulder exercise there should be a back exercise.  For example, here is a sample upper body workout:

So as you can see there is an even ratio of pushing to pulling exercises.  Once we do more pushing exercises and we strengthen the anterior musculature without a reciprocal pulling motion, the shoulders round forward and posture declines.  Again, if you only care what you look like in the mirror then by all means go for it.  For me, I rather do things right to improve posture so my shoulders and thoracic spine stay healthy and injury-free.