Core training is a hot topic in the running world, and for good reason. That’s because runners understand that the mid-section, or “core,” plays a vital role in maintaining form and proper mechanics throughout the running cycle. But, not everyone is targeting this area properly to see the results they are working so hard for.

Anytime you are executing a strength training or rehabilitation program, one of the key principles is specificity. Specificity can be viewed in two different ways…

If you are lacking specificity in anyway, it’s not surprising why the results may be less than stellar. Therefore, I implore you to assess your current core training routine and determine what adjustments can be made for more reliable results. If you are unsure of how to make the necessary changes, this article should provide some insight into which direction to move towards.

Before we dive into the specifics, it’s important to realize that there is no such thing as a “bad exercise.” Every exercise can be beneficial depending on the person, goal, and execution. However, when it comes to running, the sport itself has a unique requirement at the spine, pelvis, and rib cage, which narrows our emphasis on the particular exercises which may be the most impactful.

Now, let’s discuss 3 core exercises that are NOT making you a better runner. And, provide recommendations on how you can improve specificity, and thus, running performance.

Crunches are the dinosaur core exercise in the strength training world. They’ve been around for years and years, and their effectiveness is heavily debated by many. In my opinion, this is a valid exercise to improve strength of the abdominals and anterior core musculature. But, if we think about the principle of specificity, it does not train a movement which you would utilize while running.

Rather than strengthening the abdominals with Crunches, let’s change our approach to still target this area but while promoting stability at the spine, pelvis, and rib cage. The best exercise which does that is called the Dead Bug.

The Dead Bug is an entry level anti-extension core stability exercise. In contrast to the Crunch, the Dead Bug uses the same musculature to fire and prevent extension of the spine. This action is vital while running as it limits excessive anterior pelvic tilt, stabilizes the spine, and positions the rib cage to promote good use of the diaphragm and respiratory system.

To learn more about the Crunch vs. Dead Bug, watch this video… 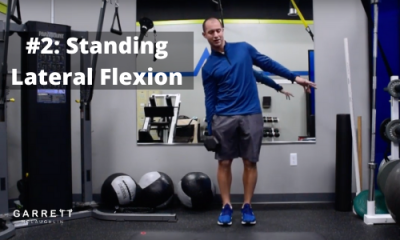 I completely understand the desire to complete the Standing Lateral Flexion exercise due to it’s targeted nature at the obliques and lateral core. We all want a slim waist and more defined midsection. However, while running it’s actually more efficient to prevent against this side-to-side spine motion which would greatly increase the amount of ground reaction force upon foot strike.

Of course, I’m not saying don’t target this area because it’s vital for efficient gait, as well as athletic and everyday movements. Instead, let’s change how we are doing it to reinforce stability and control at the lateral aspect of the spine, rib cage, and pelvis. This can be accomplished with the Side Plank and it’s many variations.

The Side Plank is a staple in the strength training and rehabilitation world, and for good reason. It’s often labeled as an anti-lateral flexion core stability exercise since it directly opposes the side bending action of the spine. By improving stability and preventing this type of motion, you are able to maintain alignment of the spine, levelness of the pelvis, and more efficient mechanics at the lower extremity.

To learn more about the Standing Lateral Flexion vs. Side Plank, watch this video…

Cable Trunk Rotations is a fantastic core exercise to build stability and resilience in the rotational plane. Unlike the exercises mentioned above, you actually do rotate to a small degree while running as the opposite arm and leg move in a coordinated and reciprocal way. That’s why this one falls into more of a grey area if we consider our specificity principle.

The biggest issue I usually see with strengthening through a large rotational range of motion is the minimal amount of rotation inherent to running. Instead of utilizing this full range of motion, it might be more impactful to build strength in a smaller range that better replicates running. Or, switch your Trunk Rotations for the Pallof Press!

The Pallof Press is a fantastic anti-rotation core stability exercise. That means, the same muscles which create rotation are working to prevent motion at the spine. The Pallof Press can be a good substitute for Cable Trunk Rotations to build stability and resilience to minimize excessive rotation and promote good positioning of the trunk over the lower extremity.

To learn more about Cable Trunk Rotations vs. Pallof Press, watch this video…

At the end of the day, it’s important to perform a strength training and rehabilitation program that is specific to your needs. Of course, building strength is never a bad thing and you can select endless exercises to do that. However, I tend to see runners strengthening specific muscles in isolation without improving stability at the core. Both of these are needed for long-term spine health and injury resilience, but stability will more readily carryover to efficient running mechanics.

Do you want to see better results with your running in 2020? Are you tired of under-performing or consistently struggling with injuries? Click here to learn more about the Healthy Running Program.