Speed and agility are common traits that all tennis players 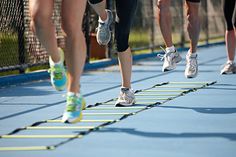 need to become successful. A player may have the best strokes and shot selection, but if you can’t get to the ball and have your body in the proper position, you are lost. That is why speed and agility training should be a part of every tennis player’s regime, regardless of age and level. With that being said, this type of skill development does need to be modified based upon the player’s experience level, and age. It can be detrimental to the young players going through their growth spurt to partake in high level plyometrics, which consist of heavy ground reaction forces being transmitted through the body, and thus is why all training programs must be individualized specifically based upon the athlete.

One misconception I hear is that a player needs to get faster and work on more speed and agility work. Although this may somewhat be true, it is commonly the lack of proper deceleration which causes these players to be slow. Controlling one’s body weight, decelerating from the movement, and then being explosive are all important factors in speed and agility. So, why don’t we work on the foundations by teaching each athlete to be stable and in control and therefore able to produce a more powerful movement. This method might prove superior when improving a player’s agility instead of always teaching them to move as fast as possible. In the following paragraphs, I will display several videos that explain the foundations of speed and agility training which focus on proper deceleration, body control, and stability.

First, let’s start with box jumps or proper jumping and landing technique. It is important to maintain good body alignment throughout these exercises because it will carry over into the sport. Why is this type of exercise important in tennis? Think of the split step. It consists of a small jump off both feet, a stable landing, and then reaction and push-off towards where the ball is being hit. By teaching the body to decelerate under control, as opposed to forcefully landing on the ground, we are allowing the ability to store elastic energy within the muscles. Not only will this limit the forces through the bones and joints, but it will provide a more powerful push-off following the controlled landing.

The ability to move laterally so fluidly is what separates tennis from so many other sports. However, it is common after fast lateral footwork, to need to change your direction and get all the way to the other side of the court for your next shot. You are only as fast as your change of direction, and change of direction requires a great degree of single leg stability and body control. For this reason, it is beneficial to slow down the movement, which increases the balance and proprioceptive component. In this video, I show a series of single leg agility drills in all planes of motions since tennis will require a fast, reactive movement to any spot on the court.

Lastly, we have a faster lateral exercise, which starts to incorporate the dynamic lateral movement with a quick deceleration and balanced landing. This builds upon the previous drills outlined above and starts to bridge the gap from the foundations to a more tennis-specific speed. Start off slow to properly learn the movement while maintaining balance, and then speed up the middle portion as much as possible while still being able to control your body weight during the landings.

I hope these foundations of speed and agility training will make a difference in your tennis game. Add a few of these drills into your warm-up routine and focus on quality of movement over quantity. Remember, tennis is not all about high speed and fast footwork, but being able to control your body and decelerate from one movement to the next. That is why some of the professionals make it look so easy on the court. Not only are they fast, but they are so balanced and in control as they move from one shot to the next.

Garrett McLaughlin is an Athletic Trainer and Strength Coach who works with many young tennis players in the Nashville area. His goal isn’t only to make young athletes stronger and faster, but more resistant to injury. Contact Garrett for more information on his tennis-specific programming.